For this, the second in my books-by-my-bed review series (see below for links to earlier blog posts on this theme) I’m staying with the subject of death. But this time it’s fictional, I think…

Arguably, Anthony Horowitz’s work is best known by fans at opposite ends of the age range; by ‘older’ TV watchers for Foyles War, Midsomer Murders and Poirot and by young readers for his Alex Rider series (which have sold a cool 19 million copies worldwide). As if to confirm his supreme talent, he was commissioned to write a James Bond novel – Trigger Mortis, published in 2015. You need a safe pair of hands for that one. 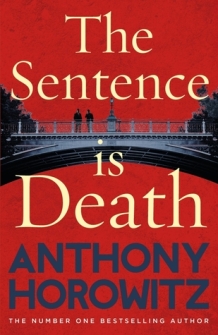 I’ve enjoyed odd episodes of Foyle’s War but have not watched it avidly; it was via another string in Horowitz’s bow – writing new Sherlock Holmes mysteries in the style of Arthur Conan Doyle – that I got into his writing.  The book I’ve recently finished reading – a gift that had sat unread by my bed for many months for no good reason – is The Sentence is Death. It’s second in an expected trilogy featuring ‘disgraced private investigator’ (it says in the back-cover blurb) Daniel Hawthorne.

Like all good crime-fighters, despite his murky past Hawthorne unofficially works alongside the police because they know he’ll probably solve the crime before them and they want to be able to take the credit.

You don’t have to be a detective to work out from the book title that the crime in question is murder. For me, the book would read as a fairly routine mystery (if there is such a thing) if it wasn’t for its structure – not just the plot – and the author’s role within it. Just as Noises Off by Michael Frayn is a play within a play (and a big West End hit that I enjoyed seeing in the early 1980s) so The Sentence is Death is really a story within a story.

From page one, where the narrator is juggling being on set for the filming of Foyle’s War with pursuing the murder investigation that’s the core of the book, Horowitz blurs fact and fiction (and clearly identifies himself as the narrator). Even the cover illustration of the paperback edition features the (real) iron bridge over Archway Road in Highgate, North London – informally knows as ‘suicide bridge’ for reasons I’m sure I don’t need to go into – that has a significant walk-on part in the story.

Interweaving fact and fiction is, of course, nothing new for thriller writers – I’ve hitch-hiked with Jack Reacher all over the USA and I trust Lee Child to have done his research to make the scenery and locations authentic. What I think makes this book quite exceptional is how Anthony Horowitz involves his real-life writer self in the story he’s telling. When you read the book, you’re reading about the author researching the book you’re reading – if you see what I mean.

I’ll never know how authors manage to plan their books, structure their plots, develop characters, work out their relationships, and sustain parallel timelines all at once, but this book adds another ingredient to the recipe and, continuing my tired analogy, cooks up a treat for the hungry reader.

Even though I read the book during lockdown – with, arguably, more time to read and less competition for my attention – I really did look forward to returning to it over the Easter weekend I consumed it – fast for me, given that I’m a slow reader. But I urge you to make up your own mind (the proof of the pudding and all that) and share your verdict here.

To order The Sentence is Death https://www.hive.co.uk/Product/Anthony-Horowitz/The-Sentence-is-Death–A-mind-bending-murder-mystery-from/23639303  (When you order online from Hive in the UK, you support local independent bookshops)